Two second-half goals helped Wolves see off a poor Manchester United side in their FA Cup quarter-final on Saturday.

It is the first time Nuno Espirito Santo's side have reached the last four of the competition since 1997-98 and they thoroughly deserved their victory over an insipid United team.

Jimenez fired home inside a crowded area after 70 minutes before Jota turned Luke Shaw inside out to add a second six minutes later and put the game beyond United.

Ole Gunnar Solskjaer's side - who had won nine away games in a row before last weekend's Premier League defeat to Arsenal - did find a late consolation through Marcus Rashford but can have no complaints with the result.

Paul Pogba clipped wide and Rashford tested John Ruddy from distance as the hosts comfortably kept United at bay during a tepid opening half hour.

Shortly before the interval, Sergio Romero was out quickly to paw away a clean-through Jota's effort after Wolves had countered quickly from a United corner.

Rashford blazed wide within a minute of the restart before Romero superbly tipped Jimenez's header onto the crossbar.

The Argentina international was called into action again shortly before the hour mark, tipping over Joao Moutinho's deflected effort after a period of intense Wolves pressure.

That pressure finally told 20 minutes from time when Jimenez swivelled among a posse of United players in the penalty area and sent a half-volley past Romero.

Another sharp Wolves counter-attack resulted in the second soon after as Jota left Shaw in a heap on the floor and drilled a low effort past Romero, who will feel that he should have done better.

A late red card for Victor Lindelof was overturned by VAR, which decided his foul on Jota was only worth a yellow card, before Rashford collected Shaw's cross and buried it into the bottom corner with almost the last kick of the game.

However, it proved too little, too late for a United side who were well beaten by their less illustrious Premier League opponents. 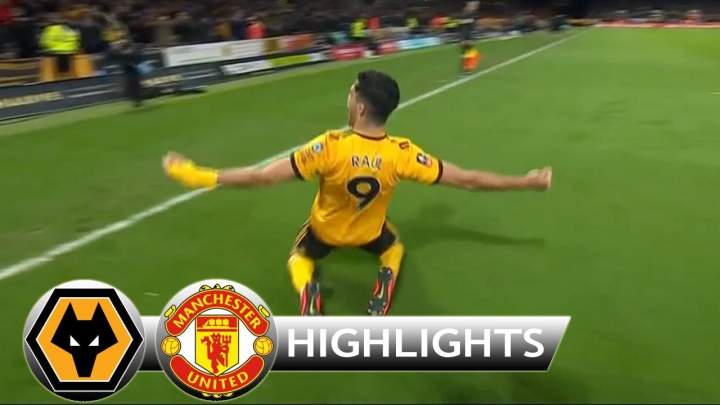